What Parents Aren’t Telling You

Discover four insights about parents that should radically impact your ministry.

As the Church navigates new realities where fewer families participate consistently, many of us are asking questions: How do we implement a church + home strategy if families aren’t coming? What are parents not telling us that we need to know? 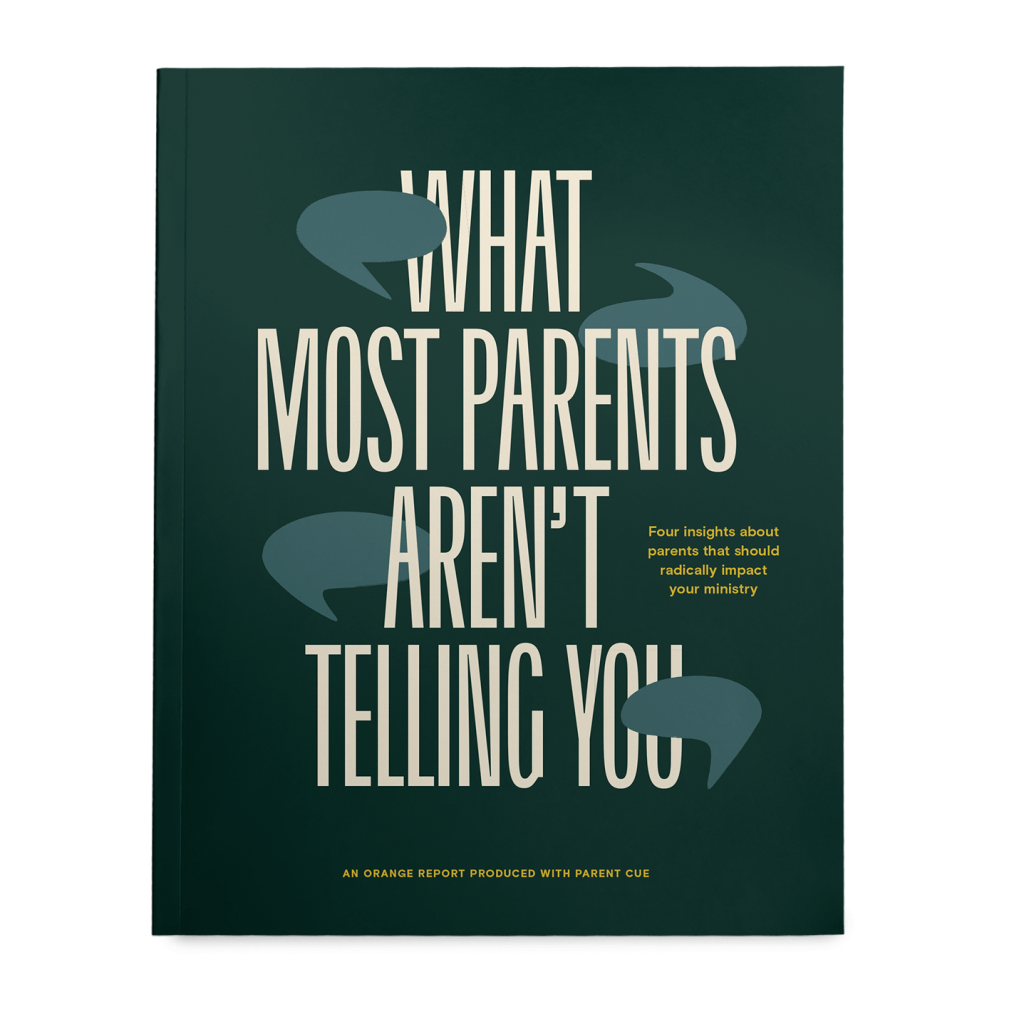 When we see parents, we can serve parents

As a leader, you likely hear from a select group of parents a lot—the parents already showing up consistently to your church.

But what if what you are hearing is getting in the way of what you need to hear—like the thoughts of the many parents and children you’re hoping to reach?

In this new research book, What Parents Aren’t Telling You, we hear from the general population of U.S parents about four things they want us to see from their perspectives.

This study did not set out to help leaders learn how to fix the family.

We set out to listen to every caregiver, in order to learn how to better serve every family.

“This research is an honest dive into what parents are feeling, thinking, and in need of at this moment in time. Here’s the bottom line: Family needs are changing, and the Church needs to figure out how to respond to those changes.”
Carey Nieuwhof
“What if we allow the findings of this research to inform the way we greet every parent, communicate to every parent, encourage every parent, and resource every parent? We just might find that the best thing we can do for a kid’s faith is to learn how to love their parent well.”
Reggie Joiner

Download the free guide to read this research with your team.​ 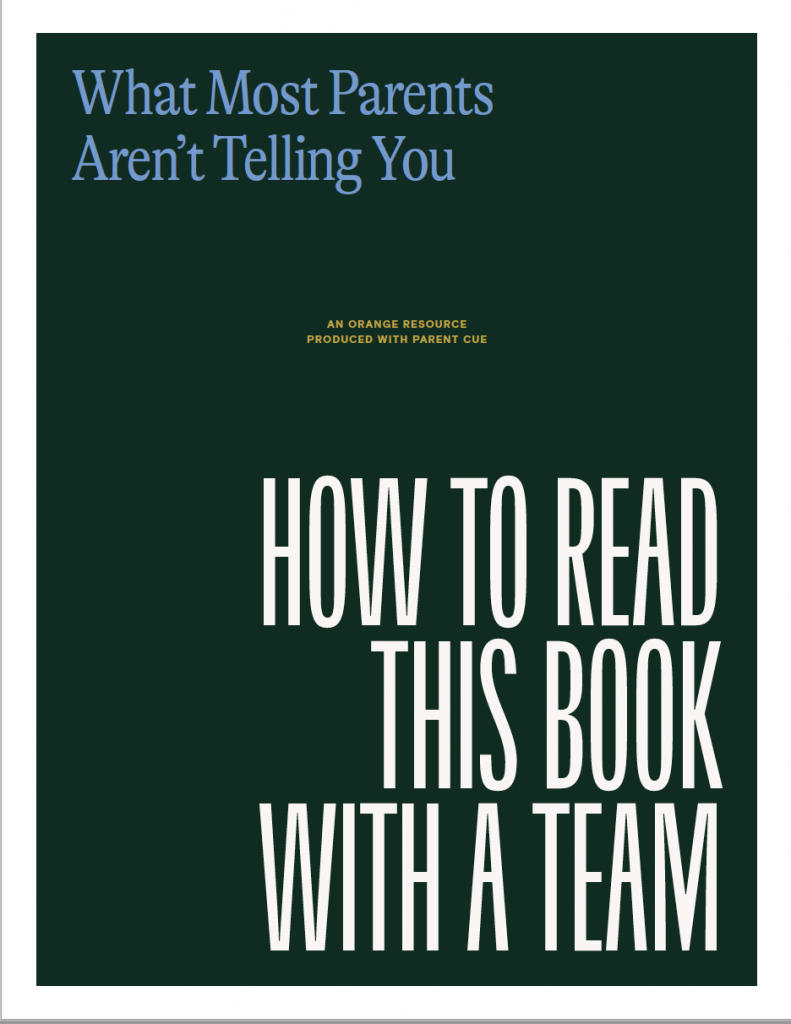 Download the free guide to read this research with your team.

“What’s one thing someone could have done for your parent when you were growing up that would have helped them be a better parent?”​

How would you answer this question? As a parent of our ongoing research, we’d love you to submit an anonymous response below.

“What’s one thing someone could have done for your parent when you were growing up that would have helped them be a better parent?”
Answer Now

Curious about the answers?

More About Our Methodology

In 2020 as the U.S. census team set out to collect census data, Orange and Parent Cue commissioned what would become a sixteen-month series of studies with Arbor Research Group to better understand the reality of parents and their relationship with faith communities in the U.S. For the quantitative data in this report, a research team from Arbor Research Group commissioned by Orange and Parent Cue conducted four primary studies over an eighteen month period from December 2020 through March 2022. Each study contained a set of repeating, foundational questions to ensure the sample was weighted for and representative of known U.S. Census ethnicity, gender, age, region, and income, and each study produced a margin of error of ±3%. One qualitative study through Orange in the fall of 2021 provided additional personal reflection.

What were the racial and income demographics of the survey participants in the General Population?

What were the racial and income demographics of the survey participants in the Christian Parent Population?

What are our terms and how did we define them?

Parent
The findings in this study use the term “parent” to refer to any adult who is consistently tasked with the responsibility of raising a young person under the age of 26. It may refer to a guardian, grandparent, stepparent, foster parent, or any number of adult-to-child relationships in which the adult has consistent caregiver responsibilities.

Kid
The findings in this study use the term “kid” to refer to any young person under the age of 26 who is the object of parental caretaking. This may refer to a person who is the biological, foster, or adopted responsibility of a parent. This study found that the term “kid” was most commonly used by parents when referring to a young person under their care, regardless of that young person’s age—although words like “children” and “adult children” were also common.

All Parents
The terms “all parents” and “general population of parents” refer to a randomly selected, nationally representative sample of 1,464 U.S. nonreligious and “religious but not practicing” parents. This group participated in a survey in June 2021.

Christian Parents
The term “Christian parents” most often refers to a randomly selected, nationally representative sample of 1,269 U.S. parents who all consider themselves to be “a committed Christian.” This group participated in a survey in February 2022. When the term “follow up” is used in Christian parents, it refers to a second, randomly selected, similar sample of 800 U.S. parents who responded to a follow-up survey in March 2022.

What were the limitations of the study?

While the directors, researchers, and writers for this project have made every effort to ensure that each study followed appropriate techniques to provide academically rigorous and thorough data, no research is without assumptions and limitations. The following are a few of the assumptions made and some associated limitations.

Our Context
This research was initiated by a team of leaders at Orange and Parent Cue, both divisions of The reThink Group Inc, whose non-profit mission is the advancement of the Church and family for the faith and future of young people. While the multi- denominational and far-reaching context of Orange serves as a primary location for asking questions about the intersection of church and family, we recognize that our location in Atlanta, GA and our own life experience is likely to shape the approach and questions included in these studies.

The Timing
It is well worth noting that the studies included in this publication began during a season of significant disruption due to the COVID-19 pandemic, the highly publicized murders of Ahmaud Arbery, George Floyd, and the Atlanta shooting of six Asian women, along with a highly polarized U.S. presidential election. Due to the timing of the studies, it is also mentionable that the general population study occurred ten months prior to the Christian parent population study, and the timing may limit the findings.

Correlation vs. Causation
The data in this study is not intended to demonstrate a causation relationship between faith and other aspects of parenting. All comparative data is intended to draw attention to correlations that may provide a thoughtful framework for further exploration.

Qualitative Reflection
Christian leader participation in the open-response question was not a random, nationally representative sample. Participants were entirely composed of ministry leaders who participate with Orange and therefore are likely to have a shared set of values for family, church, and faith. Their participation is exclusively limited to the pages of this study focused on the response to this question: “What do you wish someone had done for your parent growing up that could have helped them be a better parent?” The responses submitted are not reflected in the quantitative data and reporting in any meaningful way.

Definitions of Terms
Participants in both the general population study and Christian parent study self-reported on a variety of issues such as “bullying,” “racism,” and “anxiety,” and participants self-reported their own feelings related to “worried” and “supported.” No definition of terms was provided for these concepts. The studies sought to explore a wide range of parent perception, but the findings should be read with the assumption that parents may have varied in their interpretation of terms.

Our Choice to Trust Parents
As mentioned at the beginning of this work, we have made the deliberate choice throughout every study to take parents at their word in a posture of trust. As a result, this study is not intended to be anything other than an opportunity to listen deeply to what parents have to say about their own experience.

This website uses cookies to improve your experience while you navigate through the website. Out of these, the cookies that are categorized as necessary are stored on your browser as they are essential for the working of basic functionalities of the website. We also use third-party cookies that help us analyze and understand how you use this website. These cookies will be stored in your browser only with your consent. You also have the option to opt-out of these cookies. But opting out of some of these cookies may affect your browsing experience.
Necessary Always Enabled
Necessary cookies are absolutely essential for the website to function properly. These cookies ensure basic functionalities and security features of the website, anonymously.
Functional
Functional cookies help to perform certain functionalities like sharing the content of the website on social media platforms, collect feedbacks, and other third-party features.
Performance
Performance cookies are used to understand and analyze the key performance indexes of the website which helps in delivering a better user experience for the visitors.
Analytics
Analytical cookies are used to understand how visitors interact with the website. These cookies help provide information on metrics the number of visitors, bounce rate, traffic source, etc.
Advertisement
Advertisement cookies are used to provide visitors with relevant ads and marketing campaigns. These cookies track visitors across websites and collect information to provide customized ads.
Others
Other uncategorized cookies are those that are being analyzed and have not been classified into a category as yet.
SAVE & ACCEPT
Powered by